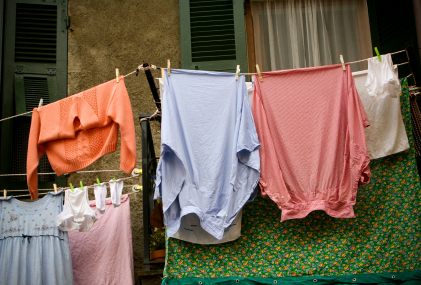 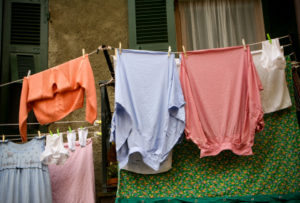 With near double digit national unemployment, the collapse of the housing market throughout the country, and soaring state deficits, you might think that State government would be too busy to worry about you and your laundry.

Last month Maryland  passed “Right to Dry” legislation, preventing condominium, cooperatives and homeowner associations from prohibiting homeowners from installing clotheslines on their property. In doing so, it joined a handful of states that have in some way addressed this issue.

Yes, clotheslines. Remember them? They were everywhere before the advent of dryers.

The so-called “Right to Dry Movement” is proposing legislation in the various states that would prohibit municipal government, homeowner’s associations, condominium and cooperative associations, deed restrictions and covenants running with the land from preventing outdoor drying of clothes through the use of clotheslines or drying racks. For websites supporting Right to Dry, see www.laundrylist.org and www.right2dry.org.

Florida’s Right to Dry statute, FSA Section 163.04, serves as the basis of the model legislation advocated by Project Laundry List. The Florida statute prohibits municipal governments and various homeowner associations from prohibiting the installation of solar collectors, clotheslines or other energy devises based on renewable resources.

The Maryland statute is more limited than Florida, pertaining only to clotheslines and only to single family property, meaning less than five dwelling units, and it allows for reasonable restrictions to be placed on the clotheslines.

A few other states have joined the laundry wars. For a thumbnail summary of legislative enactments as of last summer, see my good friend Dwight Merriam’s News Brief in Zoning Practice. (Scroll down as the article starts on the lower right.)

Many who support Right to Dry legislation do so for reasons pertaining to energy efficiency and promotion of renewable energy, and many are concerned about curbing greenhouse gas emissions, and therefore arguably reducing their adverse impact on climate change.

(I am not qualified to wade into the debate on greenhouse gas emissions and its asserted causal link to climate change, but I would note two thoughtful articles for readers interested, after the “Climategate” hubbub, in whether there is in fact a scientific “consensus” on this issue. Please see conservative columnist John O’Sullivan’s article and Jay Richard’s article in the American Enterprise Institute Journal.)

Many who oppose Right to Dry legislation do so because it is feared the open air drying of laundry could have a negative aesthetic impact on the property and thereby reduce property values. Someone’s El Grande boxer shorts blowing in the breeze may not exactly dress up the neighborhood, so to speak.

In commenting on the proposed Rhode Island Right to Dry legislation in an op-ed piece in the Providence Business News, I noted that my primary concern with this type of legislation is that it abrogates private property rights.

For example, several of these statutes flatly tell property owners what they must allow on THEIR property. And this is despite the fact that buyers in shared ownership communities, such as condominiums, are almost always given notice prior to their purchase of the restrictions governing their new home. If those restrictions are so onerous or so offensive, do not buy the property, or buy the property and seek to convince your co-owners that the restrictions should be changed.

One view may be that “Right to Dry” legislation is “Wrong to Try” and should have a “Right to Die” in the legislatures where it is pending.