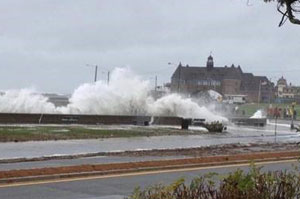 There’s a political storm brewing in Rhode Island and coastal residences and businesses could be at risk.

At issue is the accuracy of new Federal Flood Maps for Rhode Island adopted by the Federal Emergency Management Agency (FEMA).

Those maps designate areas that are at risk of flooding.  This is particularly important given the threat of hurricanes to Rhode Island.

If the maps say you are outside of a flood zone, your risks of flooding are greatly reduced.

But what if those flood maps are wrong?  What if you are told you don’t live in a flood zone, but you do?

That may be precisely the case in Rhode Island.  And because of this, Governor Raimondo’s administration is vigorously challenging FEMA regarding the accuracy of its flood maps.

CRMC Executive Director Grover Fugate told FEMA that CRMC studies indicate FEMA has underestimated the flood risk by 3-5 feet on Rhode Island’s south coast.  In order words, a home or business FEMA says is two feet above flood levels could find itself three feet under water in the event of a flood..

CRMC faults older technology and older methodology used by FEMA north of New York to determine flood levels, including underestimating wind speed and ocean swells and overestimating beach protection, as just some of the shortcomings in the FEMA calculations.

FEMA denies the charges but is cooperating with the State on a challenge to its maps through a map amendments process based on new data.

The issue is not academic. Those who remember Hurricane Sandy in 2012, which was technically “only’ a post-tropical cyclone when it hit Rhode Island with what was a glancing blow, understand the devastation that can be caused by high winds, storm surges and flooding.

Not only is the Governor’s office pursuing this, but Senator Whitehouse, who has taken a leadership role in the Senate on environmental matters, has his staff following this issue closely.

The problem is, of course, that map challenges take time, studies must be conducted and evaluated, and agreements reached.

In the interim, those who think they are outside of a flood zone may well have no flood insurance, and most property and casualty insurance does not cover flooding.  Should those properties be in a flood zone, and should a major hurricane hit before this controversy is resolved, losses in the State could be devastating.

As State officials push the challenge, we had better hope for sunny weather.

A shorter version of this article was recently published in the Providence Business News.

Mr. Boehnert practices real estate and environmental law in Providence and is the author of Buying, Owning and Selling Rhode Island Waterfront and Water View Property.