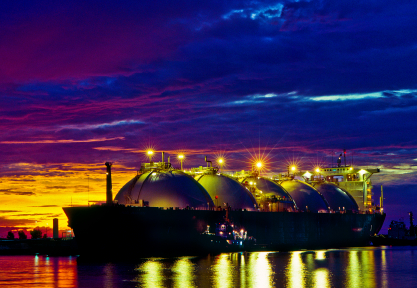 An American Bar Association Webinar will bring to a national audience Rhode Island’s and Massachusetts’ experience with the proposed development of a LNG facility as part of a discussion of issues facing states in the siting of potentially hazardous facilities in their communities.

Recall the political furor that developed when Weaver’s Cove Energy LLC proposed constructing a LNG (i.e. liquefied natural gas) facility in Fall River, Massachusetts, which would bring LNG  through Rhode Island and Massachusetts coastal waters in ships similar to the one pictured here.

I would be the first to argue that all of that furor was not justified, but by way of disclosure I should also note that I represented Weaver’s Cove Energy in its federal consistency review filing with the Rhode Island Coastal Resources Management Council.

I will moderate the panel discussion and will be joined by veteran litigator Terrence Tierney, Esq., now with the University Of Massachusetts School Of Law and formerly with the Rhode Island Attorney General’s Office, where he was involved in litigation opposing siting of the LNG facility.

Also on the panel is an experienced planner, David Westcott, AICP, the chief planner and environmental scientist with Mason & Associates, Inc. in North Scituate, Rhode Island, who will be discussing the siting of locally unwanted land uses, also known as LULUs.

For my part, I will be discussing how the 34 coastal and Great Lakes states can use the Coastal Zone Management Act’s federal consistency program to protect its communities in the siting of potentially hazardous facilities.

And relying on Rhode Island’s first in the nation ocean zoning program, I will also be discussing how other states can follow Rhode Island’s lead and actually strengthen the protections available under the federal consistency review program.

So all and all Little Rhody is going to have the opportunity to showcase lessons learned here and how this may help other states.