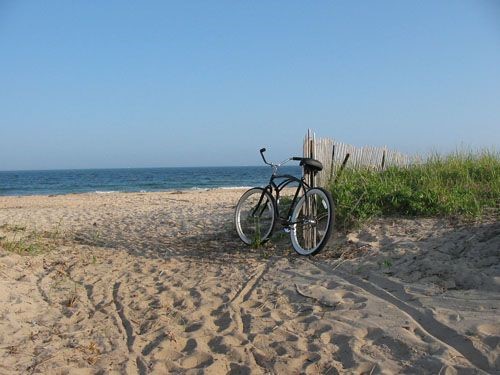 That is a question which will echo throughout Rhode Island’s coast this summer, as in years past.

Disputes over beach rights and access to the shore are not confined to the summer, but are certainly prevalent in beach weather.

While the article on which this blog is based was being written, I heard from a South County waterfront property owner over alleged interference with beach rights and dockage rights.

And just last month, Rhode Island’s Supreme Court delivered an answer to that question for Misquamicut residents and beachgoers, which has statewide significance.  That decision was Peter F. Kilmartin v. Joan M. Barbuto, et al., No. 2015-195-Appeal (WC12-579) (R.I. May 2, 2017)

In dispute in Misquamicut was the right of the public to use and enjoy an approximately 2-mile-long by 80 to 120-foot-deep beach—or approximately 24 acres.  That is a lot of beach.

Private property owners claimed the disputed area was a part of their beachfront lots, while the public claimed a right of access based on a 1909 recorded plat.

The State sued the current beachfront landowners on behalf of the public to affirm public access to the disputed beach, and numerous environmental and other groups filed briefs in the litigation.

At issue was a 1909 plat showing platted lots which, on the seaward side, also showed a line labeled “line of foot of bank” and beyond that an area labeled “beach”, which led to the Atlantic Ocean.

The State claimed the “line of foot of bank” was the boundary of the lots, and the property owners claimed the mean high tide line was their property boundary.

The property owners argued that these rights of way were to allow the public to get to the mean high tide line, where public use is permitted.

The trial judge had to determine if the 1909 plat clearly manifested the intention of the developers to dedicate the beach area to the public.  If the judge determined that the plat was ambiguous, he could consider extrinsic evidence, that is, evidence outside the four corners of the plat document, to make his determination.

In a meticulous opinion, Judge Stern, the trial justice, found that the 1909 plat did not manifest an intention on the part of the developers to dedicate the beach area to the public, and that the plat was not ambiguous in this regard.  Peter F. Kilmartin v. Joan M. Barbuto, et al., WB 12-0579 (R.I. Superior Court, Sept. 4, 2014)  The judge determined that the character of the “line of foot of bank” line was not the same as what were clearly property lines on the plat.

That being said, the court could have stopped there.  In an effort to be thorough, the court went on to consider the extrinsic evidence if in fact he had found that the plat itself was ambiguous.

Considering the extrinsic evidence, Judge Stern found such things as the early deed conveyances, reflecting the southern boundary of the lots as the mean high tide, supported a finding that there was no intent to dedicate this valuable property to the public.  In other words, the people most familiar with the plat conveyed lots that by their own description bounded on the ocean.

One would have to find that very persuasive evidence of what the platters intended in drawing their plat, were one considering extrinsic evidence.

And while tax assessor records and tax maps are not always accurate, if the lot owners whose beach area was being claimed as public had been paying taxes on the disputed beach area for years as a part of their lot, that would certainly make things more painful.

The Westerly tax assessor testified at the trial that the tax maps in the 1940s and 1950s showed the lots ending at the “line of foot of bank”.  However, the current tax map of the disputed area, prepared in 1980, showed that the property lines of the lots ran to the mean high tide line.  That is, the disputed beach was a part of the lot which was being taxed.  Presumably, a larger lot is assessed more taxes than a smaller lot.

In other words, since the 1980s the lot owners had been paying real estate taxes on beach area which the State now claimed was public property.

In a careful analysis, the Rhode Island Supreme Court upheld the trail court decision and agreed with its reasoning.

The careful scrutiny in this case deliberating the intersection of private property rights and public property rights will likely guide future questions in our State as to public access versus private rights at the shore, in what has become increasingly confrontational issues.

While some would see this as a case where the public seeking rights to the shore lost or where waterfront property owners won, that may miss the point.

From my perspective, the winners here were Rhode Islanders, beachgoers and waterfront property owners alike.  The reason is that these two decisions continue a clear and consistent pattern of our Rhode Island courts balancing the equities of public and private rights at the shore since the early 1800s.

These decisions over the years have been thoughtful, careful and thorough.  They have recognized that in the Ocean State, public access to and use of the waterfront are extremely important to our citizens for fisheries, commerce, navigation and recreation.  They have also recognized the importance of private property rights to property owners, as they are the underpinning of our free enterprise economy.

As long as courts are seeking this balance, as surely as the tide ebbs and flows, public and private rights at the shore will be preserved.

*A shorter version of this article was published in the Providence Journal.

Do You Need A Survey?

Prospective purchasers of real estate, and many owners, sometimes ask whether they need a survey.…