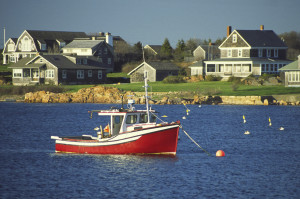 Many prospective purchasers of waterfront property expect that they will own all the land up to the water. Some may; others may not.

The reason is that the precise boundary of waterfront property depends on a number of factors, ranging from title law to contract law to statutory and case law, not to mention specific facts, such as the type of water body involved.

In other words, as a purchaser, what you see may not be what you get.  You may see a beautiful green lawn running to a pristine beach complete with lapping waves and assume you own right to the water. Unfortunately, it is not that simple.

Given the complexity of waterfront boundary issues, this article will simply summarize some of the prevailing principals.  A fuller treatment may be found in my most recent book, “Buying, Owning and Selling Rhode Island Waterfront and Water View Property:  The Definitive Guide to Protecting Your Property Rights and Your Investment in Coastal Property”, now available on Amazon.com as well as in bookstores.

This is a doctrine of ancient origin, incorporated in the common law of this country from English common law, and differing in the various states depending on case law and statutory law.  In Rhode Island, the Public Trust Doctrine, found in both our State Constitution (Article 1, Section 17) and in statute (R.I. Gen. Laws 45-5-1.2), essentially provides that the state holds title to all land below the high-water mark in a proprietary capacity for the benefit of the public, and preserves to the public the rights of fishery, commerce and navigation in these waters. See Greater Providence Chamber of Commerce v. State, 657 A.2d 1038, 1041 (RI 1995). (In the interests of full disclosure, I represented the plaintiffs in that litigation.)

The Public Trust Doctrine in Rhode Island essentially applies to tidal waters, being waters impacted by the ebb and flow of the tide.

There was, however, dispute under the Public Trust Doctrine as to where the exact boundary was drawn in Rhode Island between private ownership and public rights.  Is it the low water mark (as in Massachusetts), the high water mark (i.e. the highest tide line) or somewhere in between?  That question was answered definitively by our Supreme Court in its decision in State v. Ibbison, 448 A. 2d 278 (RI 1982). The court rejected the low tide line as being unfair to the public, as it would leave no dry sand for public enjoyment of public trust doctrine rights.  It also rejected the highest high water mark occurring during Spring tides because it would “unfairly take from littoral owners land that is dry for most of the month”.

Instead, the Court adopted the mean high tide line because it was fair to both the property owner and the public and because it could be established with scientific precision, being the arithmetic average of the high tide during an 18.6 year Metonic Cycle.  (The Metonic Cycle begins and ends when a new moon occurs on the same day of the year as it did at the beginning of the last cycle.)

The Rhode Island Supreme Court has, over its history, been extremely thoughtful and extremely fair in balancing public and private rights at the shore.  (For a discussion of this, if you are really a glutton for punishment, please see my law review article in the William and Mary Environmental Law Journal (Greater Providence Chamber of Commerce v. State: Balancing Private Property Rights in Filled Tidal Lands Under the Rhode Island Public Trust Doctrine, (Vol. 21, Issue 3, 1997).)

All of this is a long way of saying that when you look at a property bounding on tidal water, you will not know precisely where the boundary is.  For this, you will need to engage a surveyor.

That being said, there may be other factors that impact the boundary line, such as changes by the actions of nature (waves, wind, etc.).  As a generalization, when the change is natural, gradual or even imperceptible, such as a result of erosion, accretion (i.e. the accumulation of land by natural causes) or reliction (i.e. an increase in land by the withdrawal of water),  the boundaries between private and public land are changed.

However, again as a generalization, sudden changes in land mass, such as the result of a storm, do not change the boundary line between private land and public land.

Individual case by case determinations can be made by a surveyor working with legal counsel.

As I said, when dealing with waterfront property, the boundary may not be what you think!